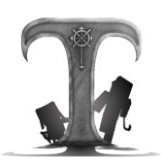 By Tenshi_Akuma,
May 13 in Modder Support