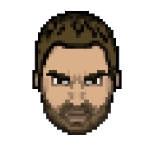 By Noriel_Sylvire,
July 8 in Modder Support